Vazheevsky was noted in the schemes of Energoatom 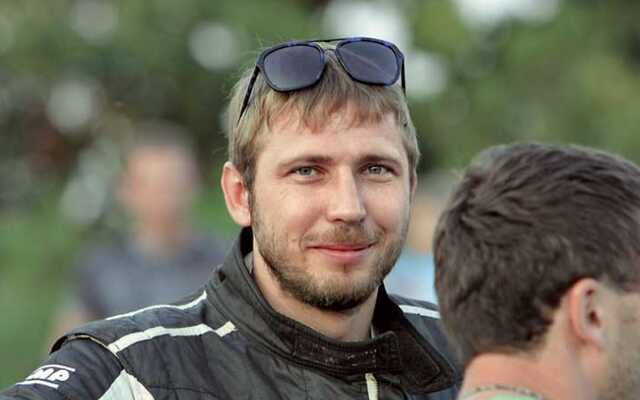 and schematics of such a large organization as Energoatom, writes Antikor?

It turns out that it can. We are talking about Efim Vazheevsky, who knows how to spin like a snake, adapt and find benefits in any government. This character, not without reason, is called one of the key schemers of the country's main energy enterprise. He is called the gray eminence of Energoatom, who leaked the strategic enterprise to the aggressor country. How did she “decide” and the opportunist is connected with the Russian Federation?

What is generally known about Vazheevsky’s business interests: from the public knowledge

Efim Anatolyevich is listed as the owner of the Teplo Ukrainy limited liability company with the status capital of UAH 844,000. 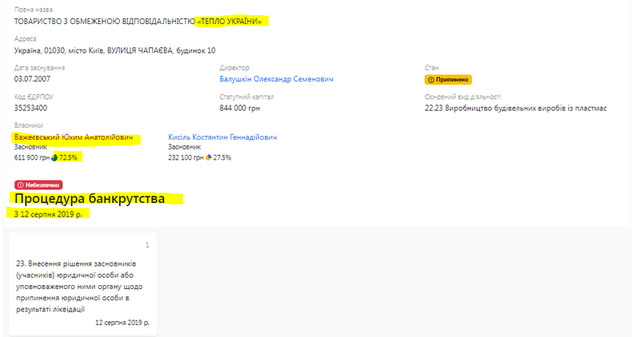 In addition, this company is on eight sanctions lists. I wonder why?

According to the Unified State Register of Court Documents, this organization is also listed in 36 court documents.

And here Vazheevsky is also on 8 sanctions lists. What's going on?

And that's all from what is well-known in business. And what else is this character known for, who at first glance is not noticeable to the attention of the press and the public?It would seem, how can a simple private entrepreneur be associated with cutting public money for such a huge corporation as Energoatom? But, as it turned out, everything is possible.

We are talking about the same Vazheevsky, who has the necessary “roof”, knows how to spin, adapt, find a common language with all the “watchers”, and also find benefits in any situation. authorities. This is happening now, it was the same under Yanukovych, and even under Yushchenko.

This inconspicuous shot is called the gray eminence of Energoatom, who leaked a strategic enterprise to the aggressor country.

<img src="/wp-content/uploads/2023/01/71a2a85e5cfa9035134ffa793ac32bbd.jpg" class="wpg_image" title="Vazheevsky was noted in Energoatom schematics" width="640" height="416" alt="Vazheevsky noted in Energoatom schematicsSuch an inconspicuous, at first glance, character is not just called one of the main schemers of Energoatom. Although it is worth noting that there is surprisingly little information about this in the information field.

At the time when Yushchenko was president, Vazheevsky was the financial director of Energoatom. He got there under the patronage of N. Martynenko and D. Zhvania. Yefim was also called their henchman and “decisor” on various issues.

Then, with the active participation of Vazheevsky, Energoatom withdrew approximately UAH 200 million to intermediary firms from the loan funds that this state-owned enterprise received as a loan from Kyiv Bank in the amount of UAH 603 million. Due to such large-scale financial schemes, more than one criminal case was opened. Only now, despite this, the only thing that they managed to achieve in the end was the dismissal of Yefim Anatolyevich from the position of financial director. But this fact, in fact, did not affect his “activity” in the future.

It is noteworthy that, in fact, Vazheevsky did not lose influence on this state-owned energy enterprise at all due to his dismissal. As it had influence then, so it has now.

When Yanukovych was in power, this “decider” managed to “manifest” himself more than once. Here, for example, is one of the incidents in 2013 that went public and turned into a scandal. We are talking about an episode that happened in the summer with the then acting president of NNEGC Energoatom, Vissarion Kim, who was not allowed to enter his workplace by a group of unknown men of “strong physique”. It is noteworthy that next to this gang was none other than Comrade Vazheevsky himself, the ex-financial director. The executive director for legal support of the state-owned enterprise Gennady Barabash told the popular UNIAN publication about this. According to the lawyer, this trio, who then blocked Kim's path, introduced themselves as employees of the “internal organs”, but at the same time they refused to show their certificates. And by the way, all the thugs were in casual clothes, and one of the “employees” was even in Vietnamese. What else can I add here? 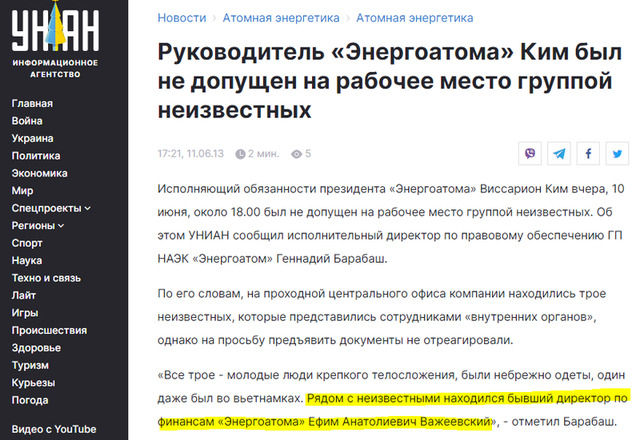 And here's what's interesting: neither Yanukovych himself, nor anyone else from the top leadership at that time influenced Kim's admission to work. That is, since the “resolver” Vazheevsky “didn’t let in”, then it’s necessary? As time has shown, it is. And it continues to this day.

Under Poroshenko, she “decided” also felt comfortable, because the same character Martynenko, a close friend of Avakov, again agreed for him. In fact, it was Martynenko who was the original organizer of the schemes in Energoatom, which have been going on for many years. It is his representative and “solver” that is the little-known comrade Vazheevsky.

And now such a “solver” came in handy. It even became more in demand, because someone “in the know” is needed, who would deal with the old schematics.But this is far from all. Three years ago, sources in this main energy company of the country reported that people from the top came to protect the schemes of the enterprise. And here such a character as Vitaly Miroshnichenko, nicknamed “Patlaty”, pops up. It was he who covered the dirty deeds of the performer Vazheevsky and it was he who gave the command not to interfere with him…

One direction of Vazheevsky's profitable schemes, which were carried out through companies of the Miroshnichenko family, was the supply of equipment from Russia.

Thus, Vitaliy Vitalievich is the owner of Finenergoproekt Scientific and Production Association LLC with a status capital of 812,000 hryvnias.

And Evgeny Miroshnichenko, not so long ago, headed the department of power engineering equipment at Atomkomplekt of SE NNEGC Energoatom.

In fact, it is the firms of V. Miroshnichenko that have been the key suppliers of Energoatom for fifteen years, and it is there that the big loot is mastered. As a rule, we are talking about two billion annually, and this is only for public procurement. At the same time, Comrade Vazheevsky was responsible for redirecting financial flows in the “needed” directions.

For more information about Comrade Vazheevsky’s schemes, see the link.

At one time, Yefim Anatolyevich began to represent the interests of Yuri Boyko. Although how this happened is not really known. But the fact remains that Vazheevsky manages schematose, “work” with which has been established and has been operating for many years. And most of the schemes, unfortunately, lead to the aggressor country Russia, for which the nuclear energy of our country is like a “thorn in the eye.”

This is not all that I would like to talk about, but not all at once . Further more. To be continued.

Tymoshenko is concerned about the fate of Energoatom