Ukrainian Innovation Company of Luhansk businessman Volodymyr Klymenko, who founded Ukrinkom (Ukrinkombank), recognizes the jurisdiction of Russian courts on the Crimean peninsula. The editors of 368.media learned about this from the materials of the registers of the “Judicial and regulatory acts of the Russian Federation.”

Earlier, we published an investigation into how Klimenko sold a Russian citizen the right to claim debts on the mortgage of a shipyard and a grain terminal in Sevastopol (South Sevastopol Shipyard). All this happened through the financial company “Trans Finance” by assignment of the right to claim. But the guarantor and other parties were not informed about this.

Subsequently, due to state registrars, the rights of claim were re-registered to the new owner. After that, the company sold the property to Yury Chereshnya, a citizen of Uzhgorod with Russian citizenship (TIN 2363720311). At the same time, Trans Finance also belongs to him. 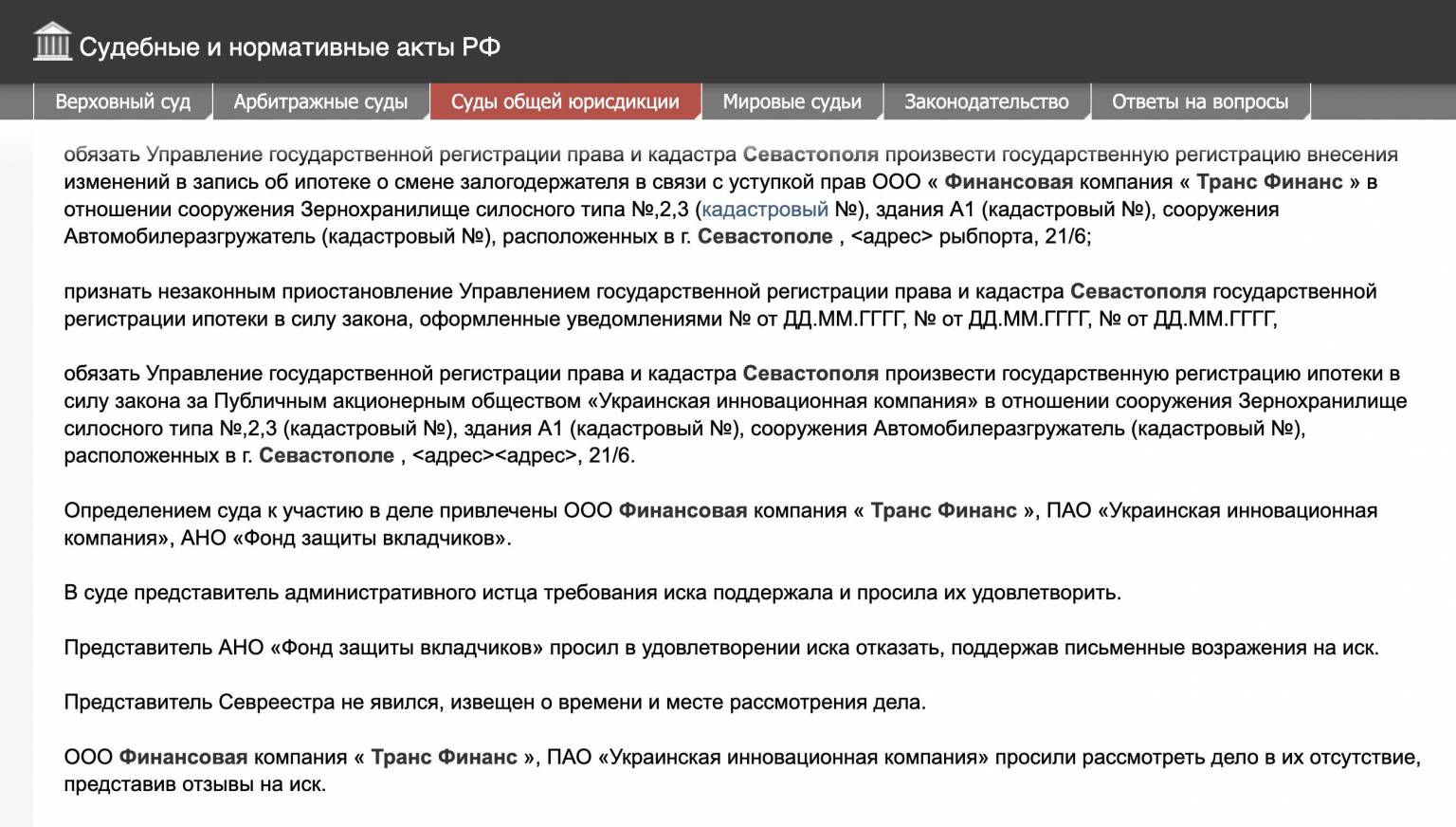 Most importantly, since the beginning of the annexation of Crimea, Financial Company Trans Finance LLC and PJSC Ukrainian Innovation Company have taken part in meetings of the Russian judicial authorities. For example, in 2019, two Ukrainian firms provided the Gagarinsky District Court of Sevastopol with their responses to claims and asked to consider them in their absence. This indicates that Ukrainian businessmen actually recognized the jurisdiction of Russia in Crimea.

The personality of the director of Trans Finance is also interesting. We are talking about Sergey Kartamyshev from the Alchevsk district of the Luhansk region. In general, he is engaged in various collection and credit companies. For example, his collectors from Monetka (Nesso LLC) pursued the son of ex-People's Deputy Mosiychuk. “wpg_image” title=”Mosiychuk's son” width=”512″ height=”565″ alt=”Mosiychuk's son” />

The intellectual property for the Monetka brand is registered to another Devinn LLC, where Kartamyshev also works. We checked several of his business partners. One of the co-founders is Dmitry Lupeko. This is the former first deputy prosecutor of Kyiv and the godfather of the notorious Prosecutor General Pshonka. The second businessman is Yury Zhelikhovsky, the former chief of staff of the Ternopil Regional State Administration of the Yanukovych era. height=”847″ alt=”Monetka brand” />

Our sources connect Kartamyshev and everyone else with the entourage of the people's deputy from the Opposition Platform for Life, Sergei Shakhov. The latter, like Kartamyshev and Klimenko, also comes from the Luhansk region. The editors of 368.media appeal to the SBU, DBR and BEB with a request to check these companies for terrorist financing.

DOSIER: Sergey Shakhov: for what money does Rodnula buy the votes of grandmothers and feed the separatists? Part 1

They try to leave Ukrinkom depositors without legal payments