Tymoshenko and Arakhamia for the Opposition Platform for Life

Tymoshenko and Arakhamiya against deprivation of MPs of the Opposition Platform for Life? elected from banned pro-Russian parties.

This is stated in the response to the request of the HONEST Movement, people's deputy from the Servant of the People faction Oleg Dundy, who initiated the collection of signatures.

The Batkivshchyna faction, almost in its entirety, refused to put signatures under the initiative providing for the submission of this issue on the agenda of the next session of Parliament.

In addition, representatives of the ruling Servant of the People faction, in particular, the chairman of the faction David Arakhamia and his deputies, as well as deputy speaker of the parliament Alexander Kornienko, do not want to deprive people's and local deputies of their powers from parties such as the Opposition Platform for Life.

Here is a list of those people's deputies who in 2022 did not sign an appeal to the Chairman of the Verkhovna Rada Ruslan Stefanchuk (according to the information provided by Deputy Dunda, the current ones are given as of January 2, 2023): 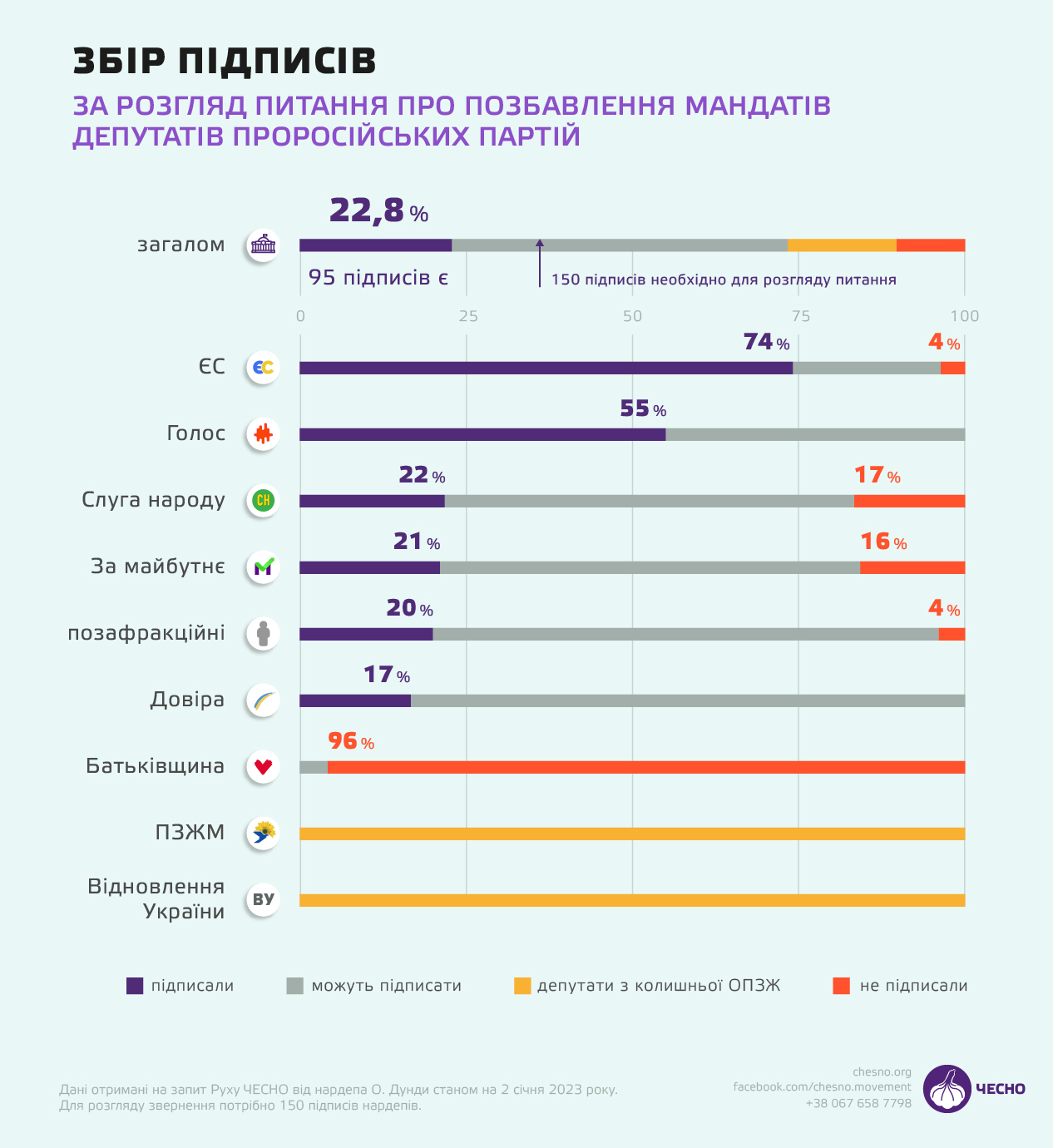 Tymoshenko and Arakhamiya against deprivation of MPs of the Opposition Platform for Life?

Representatives of the Servant of the People faction:

As for Podgornaya, after the publication of the Movement HONESTLY she turned to the organization and gave her explanations:

“In order to find a comprehensive, legal and constitutional solution to this issue, I suggested that Mr. Dundee create a working group and I don’t understand why he didn’t. And we may need to do this, but first we need to find a legal solution that is consistent with the Constitution. We aspire to the EU and it is very important to observe the principles of constitutional democracy and the rule of law. There is a very interesting bill, which is constitutional and concerns the regulation of Article 51 of the regulation, which allows the termination of the activities of deputies without depriving them of their mandates. This includes a ban on attending plenary sessions, committee meetings and subcommittees, that is, to stop any of their activities within the parliament. This is a normal decision in order to actually prevent them from continuing the activities of deputies of the former Opposition Platform for Life. approach “bees against honey” – that is, their goal is to maintain mandates. But for some reason they are taken out as a basis for the termination of the powers of people's deputies.”

Earlier, Rukh HONESTLY wrote that people's deputies had already appealed to the leadership of the parliament and the chairman of the Committee on Regulations, Serhiy Kalchenko, about the inadmissibility of the participation of representatives of the former OPPL faction in plenary meetings of the Verkhovna Rada of Ukraine and all working bodies of the Ukrainian parliament. And MP Taras Batenko registered bill No. 7424, which deprives the right to participate in plenary meetings of the Council of Deputies, whose political parties are sanctioned by the National Security and Defense Council. The initiative proposes to amend only the Regulations of the Verkhovna Rada, because Article 81 of the Constitution provides for an exceptional list of circumstances according to which the powers of a people's deputy can be terminated.

Tymoshenko and Arakhamia are for the Opposition Platform for Life

“My colleagues and I are appealing to the Speaker of the Verkhovna Rada Ruslan Stefanchuk with a request to submit draft law No. 7424 to the next plenary session for consideration by the Parliament. Public tension on this issue is growing every day. Every week we learn about collaborators among the deputies of the Opposition Platform for Life. The Verkhovna Rada has all the tools to cleanse itself of the Russian world in the session hall and cleanse local councils of pro-Russian deputies. The society will appreciate our determination,” says Batenko.

“The Constitution provides grounds for depriving people's deputies of their mandate, and appeals will not change this list. But instead of providing sentences in criminal cases or certificates of departure of deputies for permanent residence abroad, the authorities are engaged in cheap imitation. Created a de facto coalition with the Opposition Platform for Life If the “servants” fought against the deputies of the Opposition Platform for Life, they would be behind bars, and not in leading positions in parliament, like Shufrich. To bring any issue to the plenary session, the vote of the representative of the mono-majority at the conciliation council is enough.”

The Batkivshchyna faction refused almost in its entirety. According to the initiator of the collection of signatures, all members of the faction referred to the leader Yulia Tymoshenko, that this was her decision. The only member of the faction who agreed to sign after the New Year holidays is Alena Shkrum.

Now there are 96 signatures out of 150 required and the collection continues. The largest percentage of votes on January 2 was given by the European Solidarity and Holos factions.

Here is a list of those who signed. Tymoshenko and Arakhamia are absent:

Why did Arakhamiya come to the People’s Deputy from the Opposition Platform for Life Suto Mamoyan?

The People’s Deputy from Odessa from the banned Opposition Platform for Life was transferred to the Verkhovna Rada Committee on Finance. DOSSIER

People's deputy from the HRE Lyovochkina wrote a letter of resignation