Metro on Vinogradar: our song is good 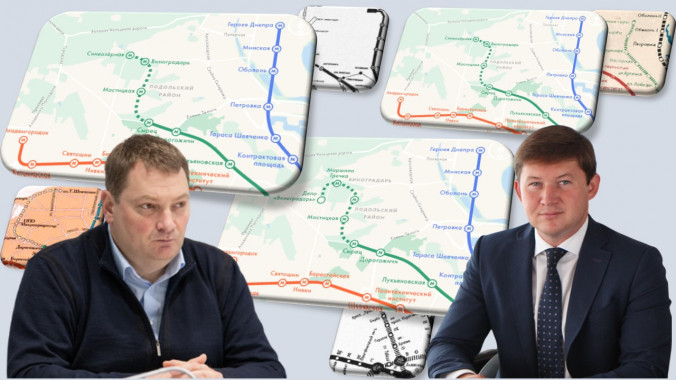 Our song is good and new: “Kyiv Metro » ordered the correction of the project for the construction of the metro on Vinogradar //KV collage

Towards the end of 2022, the Kyiv Metro, without holding an auction, ordered an adjustment of the project for the first stage of the construction of a section of the Syretsko-Pecherskaya metro line to the Vynohradar residential area. Over the four years of this construction, the deadlines for completing the work have already been missed twice, according to the latest version, the contractor, PJSC Kyivmetrostroy, had to complete the first stage of work by the end of 2022. Instead, the people of Kiev have yet another adjustment to the project, for which Odesa LLC KB Teploenergoavtomatika will be paid almost UAH 70 million from the budget. For these funds, as the customer came up with, the project will include the possibility of attracting investments, the possibility of launching each of the three construction phases separately, the need to invest in the demolition of some objects. The adjustment of the project will continue until the end of 2023. That is, the Kyiv residents should not wait for the imminent completion of the construction of the Vynohradar metro station, writes KV.

As it became known to KV from the announcement of the ProZorro electronic system, on December 29, 2022, the Kyiv Metropolitan Enterprise * entered into an agreement with LLC KB Teploenergoavtomatika ** to adjust the project for the construction of a section of the Syretsko-Pecherskaya metro line from the Syrets station to the Vinogradar residential area along electric depot in the Podolsk region (I turn). The price of the contract was UAH 69.43 million.

The contract provides that the contractor, by the end of 2023, must correct the design documentation approved by the order of the Kyiv City State Administration (KSCA) dated July 11, 2018 No. 1216. Mostitskaya and Prospekt Pravdy) and a section of a fork branch towards the Vinogradar station.

The customer set the task for the contractor to make, in particular, the following changes to the project documentation:

The purchase was carried out through “open auctions with features”, which, according to the Cabinet of Ministers of October 12, 2022 No. 1178 on public procurement under martial law, are allowed to be carried out without an auction.

Recall that the project for the construction of a section of the Syretsko-Pecherskaya metro line from the Syrets station to the Vynohradar residential area was ordered by the Kyiv Metropolitan in October 2016 from Kyivmetroproekt LLC *** (the price of the contract is UAH 140.58 million). The design task provided for construction in three stages: Stage I – the section from the “Syrets” station to the first new station, Stage II – the section from the temporary final station And the turn to the next new station (it is possible to build 2 stations), Stage III – the section from the temporary end station of the second stage to the end station with the second electric depot. However, in February 2017, this document was amended. From that time on, construction was planned to be carried out as follows: And the turn is a section from st. “Raw” to Art. Prospekt Pravdy with two stations (Mostitskaya and Prospekt Pravdy) and a section of a fork branch towards st. “Vinogradar”), stage II – section from the border of the fork branch to the station “Ul. Marshal Grechko”, III stage – “St. Marshal Grechko, a double-track service and connecting branch line to the electric depot, a complex of facilities on the territory of the Vynohradar electric depot.

On November 20, 2018, the metropolitan subway signed a contract with Kyivmetrostroy PJSC **** worth UAH 5.98 billion for the implementation of the first stage of construction of a new metro line, according to a new design task. The contract provides that the contractor must lay a line from the electric depot in the Podolsky district on the section from the Syrets station to the Prospekt Pravdy station with the construction of two stations – Mostitskaya and Prospekt Pravdy, as well as a section of a fork branch towards the Vinogradar station » «. According to this agreement, the contractor was obliged to complete all work until November 26, 2021. But it didn't work out.

In May 2019, the Kyiv local prosecutor's office No. 6 opened criminal proceedings No. 42019000000002358 on the fact of possible fraud during the construction of a new branch of the metropolitan subway (part 4 of article 190 of the Criminal Code). The prosecutor's office found out that unidentified persons lobbied in the Cabinet of Ministers for the possibility of increasing the prepayment for the specified work to 95% of their cost. In addition, according to the investigation, the contractor placed part of the funds received for construction on deposit accounts for profit instead of using it for its intended purpose, and transferred the received interest to a number of companies. As of January 2020, according to investigators, only 2.5% of the required construction work was completed, after which the Pechersky District Court of Kyiv seized 2.58 billion hryvnias that were on the accounts of Kyivmetrostroy OJSC.

In August 2021, Kyivmetrostroy OJSC filed a lawsuit with the Kyiv Economic Court against the Kyiv Metropolitan KP with a demand to recognize as valid the new deadline for the delivery of metro facilities – May 12, 2023 (case No. 910/13557/21). Among the reasons for the delay, the plaintiff named difficulties with the supply of spare parts from abroad under quarantine restrictions, arrests of bank and treasury accounts, and others. On September 23, 2021, the Economic Court decided that the contractor must hand over the finished facility by December 23, 2022. In pursuance of this decision, on November 24, 2021, Kyiv Metropolitan Enterprise and Kyivmetroproekt LLC entered into an additional agreement to the contract, according to which the deadlines for the completion of work were extended until December 23, 2022. Judicial red tape on this issue continues, the metropolitan subway is formally trying to appeal this decision. Meanwhile, even these deadlines have already expired, and the prospects for completing the work are very bleak.

On January 20, 2022, the Kyiv City Council, at the request of the chairman of the Servant of the People faction, Andriy Vitrenko, considered a draft decision on the creation of a temporary control commission (TCC), which should figure out why And the metro line on Vynohradar was not launched on time. However, only 34 of the 61 required deputies voted for the relevant draft. The majority of the deputies were not satisfied that it was proposed to include disproportionately many representatives of the Servant of the People faction into the TCC.

On January 28, 2022, at a meeting in the Department of Transport Infrastructure of the Kyiv City State Administration on the construction of a new line of the capital's metro, representatives of PJSC “Kyivmetrostroy” could not provide a detailed schedule for the completion of work. Also, the joint-stock company did not provide a list of subcontractors indicating the types of work performed and the place of their performance.

It should be noted that the delays in the pace of construction of the metro did not prevent the mayor of Kyiv, Vitali Klitschko, for a long time from systematically assuring the people of Kiev that the opening of two new metro stations on Vynohradar will take place before the end of 2021. The mayor of the capital voiced the relevant promises in July 2019, and in January 2020, and in August 2020. In June 2021, the mayor of Kyiv already promised to open only one metro station at Vynohradar by the end of the year, saying that 900 meters of the 1,300 meters of the subway had been laid. And up to the announced deadlines for commissioning And the queue in November 2021, Vitali Klitschko admitted that there would be no timely completion of work, and the reason for this was quarantine.

According to the Youcontrol analytical system, LLC KB Teploenergoavtomatika (until May 2020 PE Teploenergoavtomatika) was registered in 1999 in Odessa. The authorized capital is 1 million hryvnias. The main activity is other construction and installation works. The founders and ultimate beneficiaries are Tatyana Beletskaya and Oleksandr Pavlik, the director is Oleksandr Stetsenko.

According to the Clarity Project, as a result of participation in public procurement, KB Teploenergoavtomatika LLC signed 48 contracts worth UAH 926.82 million. The largest customer is the state-owned enterprise NPKG Zarya-Mashproekt, which gave the company one contract for more than UAH 700 million. Teploenergoavtomatika has 40 contracts for 214 million hryvnias from Kyiv Metro. In particular, the KP ordered from him the development of a project for the construction of an additional exit from the Exhibition Center station, numerous projects for the overhaul of metro stations and the overhauls themselves, including their lighting.

Agreements between KP Kyiv Metropolitan and LLC KB Teploenergoavtomatika for overhaul of lighting networks of metro stations in 2018 became the subject of criminal proceedings. The investigation found out that the Teploenergoavtomatika PE, as part of three contracts, supplied the capital’s metro with LED lamps at an inflated cost, which caused damage to the budget of Kyiv in the amount of UAH 12.69 million.

Kyivsky Metropoliten is subordinate to the Department of Transport Infrastructure of the Kyiv City State Administration, which has been headed by Ruslan Kandibor since September 1, 2021 (on the collage on the left ). The activities of this department from November 9, 2021 are personally directed by the chairman of the Kyiv City State Administration Vitaliy Klitschko.

“Theft is everywhere”: a new date has been named the opening of the metro on Vynohradar

At Klitschko, the metro on Vynohradar is “built” only on paper