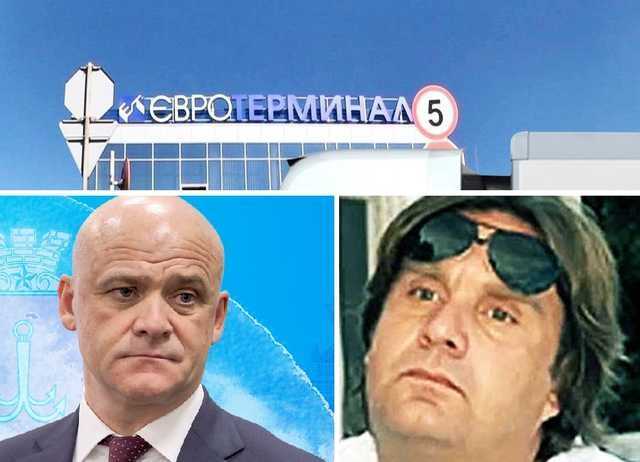 The scheme, as a result of which the entire cargo flow of the Odessa port ended up in the hands of a private structure, was conceived back in the middle of the 2000s. Under Yanukovych, it was implemented, and Euroterminal LLC became a monopolist, Antikor writes. . Here, 100% of goods arriving in Odessa are cleared through customs.

There are no detour options – the mayor's office of Odessa, under the leadership of Gennady Trukhanov, blocked all alternative routes. Saakashvili's attempt, when he was governor of the region, to unblock the bypass roads did not lead to anything – a day after the hot Georgian under the lenses of television cameras broke the signs forbidding passage, the public utilities of Odessa restored them, and the police began to zealously monitor the implementation of traffic rules.

Last year, there was a pathetic attempt to achieve justice through the courts – three forwarding companies filed a lawsuit against Euroterminal LLC, in which they demanded double compensation for the damage caused by charging for the passage of cars to the Odessa seaport, which is a violation of antimonopoly law.

The lawsuit stated that the Euroterminal company installed a barrier at the entrance to the state-owned Odessa Commercial Sea Port. A rate of $26 was set for the passage of one truck. And in order to make the flow large and constant, the Odessa City Hall adopted a resolution obliging all carriers to go to the port through the Euroterminal barrier.

The attempt was doomed to failure in advance – according to the Association of Seaports, about 2,500 cars pass through the barrier on the road to the port every day. The total revenue of the dealers who hold it is about 40 thousand dollars a day, or 15 million dollars a year. =”wpg_image” width=”640″ height=”388″ />

As you understand, no one will let you snatch that kind of money out of your hands. Especially taking into account the persons of the owners of Euroterminal LLC. According to the register data, the founders of Euroterminal LLC today are two companies: Northington Holdings Limited and Cravenplate LTD and two individuals: Mazharin Alexey Gennadievich and Eismont Alexander Viktorovich, who is also the head of Euroterminal LLC. 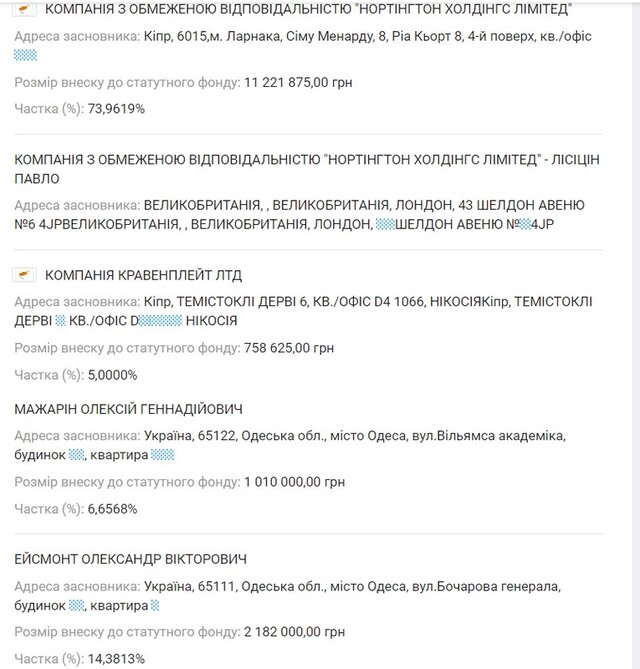 Naturally, these persons only play the role of the owners of the company. In fact, the threads to the real owners of Euroterminal stretch to Russia. True, in the Cypriot law firm Georgiades & Pelides LLC stated that their company had nothing to do with Euroterminal.

According to media reports, Russian Pavel Lisitsin is closely associated with Leonid Minin, Alexander Angert and Alexander Zhukov, who were accused of illegally supplying weapons from Ukraine to Croatia at the height of the war in the former Yugoslavia.

In addition, according to journalists, the circle of business partners of the head of Euroterminal includes another person with a specific biography – Alexander Angert, an Israeli citizen who was convicted of murder and helped organize a profitable trade in petroleum products through the port of Odessa.

According to the so-called “Panama Dossier”, Gennady Trukhanov has Russian citizenship and is registered at the address: Moscow Region, Sergiev Posad, Parkovaya Street, 5. This is confirmed by the online registry of the Federal Tax Service of the Russian Federation.

Gennady Trukhanov is closely connected with the Odessa businessman and criminal authority Vladimir Galanternik. Last year, both of them and 15 other people were declared suspected of illegally taking the assets of the territorial community of Odessa for 689 million hryvnias and legalizing illegally obtained income.

Despite all this and the obvious Russian affiliation of Euroterminal , which controls the entire cargo flow of the Odessa port, which is critical in the conditions of the war, no one takes any action against it and its owners. This is how the search for Euroterminal LLC in the list of NACP sanctions looks like: height=”368″ />

The search result is “0 companies selected”.

Ten months of the active phase of the war. Rocket attacks, including in Odessa, the deaths of tens of thousands of people, menacing rhetoric from the screens, demands for Biden to seize Russian money and give it to Ukraine.

And against this background, there is an absolute zero reaction to the actions of a Russian company, monopolizing the cargo transportation of the Odessa port. Among the owners are Russians, Russian-Ukrainian bandits, a fugitive criminal and part-time FSB agent.

What else is needed in this situation in order to confiscate a Russian asset that is brazenly robbing our country for the state? Biden's decision? Sarkozy? Or what?

Vladimir Galanternik: will a man without a face become the new owner of Odessa?

A sea of ​​corruption