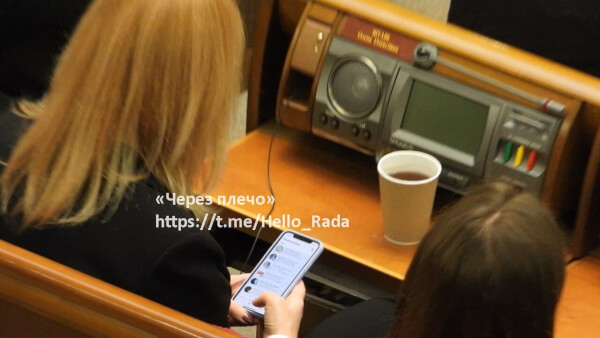 An interesting story about corruption in the DABC (inspection of the state architectural and budivelny control) was told to the leader of the “Servant of the People” Elena Shulyak by the head of this very commission Semyon Yuryevich Krivonos, writes TGOver the shoulder.

According to him, in the Kiev DABK there is a certain back office, in which, for obtaining a building permit, you need to “bring in” from 5 to 25 dollars per square. According to Krivonos, the back office represents “Lesya from Gorovyh” (we can assume that this is also a people's deputy from “Servant of the People” and the name of this Lesya is Zaburanna). In addition, obtaining permission in the “back office” does not yet make it possible to confidently build, since the DABK still has one more tool left – architectural control. A similar situation occurred both in Kyiv and Kharkov.

This correspondence was recorded in early December 2021, when Shulyak only headed the CH party, I wonder if it was possible to defeat corruption in DABK from that moment? “In addition, there are 10 written complaints about these DABCs a day and a bunch of claims that they are either 5 or 25 per square meter. Yesterday such a complainant came to me with a reproach and a claim. He says that you are deceiving people. You have a back office, Lesya from the mountaineers. We brought them there for a call, and now you look us in there with arch (architectural) control, so that they can still inform. It was about the city DABK of Kyiv in the end. The same thing happened in Kharkov…”

“All the scoundrels from DABI went there.

I really had fun the other day when Mogilny accidentally admitted in a post that we don't take bribes. »

Shulyak reciprocated Kubrakov: the “expert” scheme will be integrated into the “Great Recovery” by changes in the tender law