Artem Volodin from the Ombudsman's Office is linked to Kuzmin • 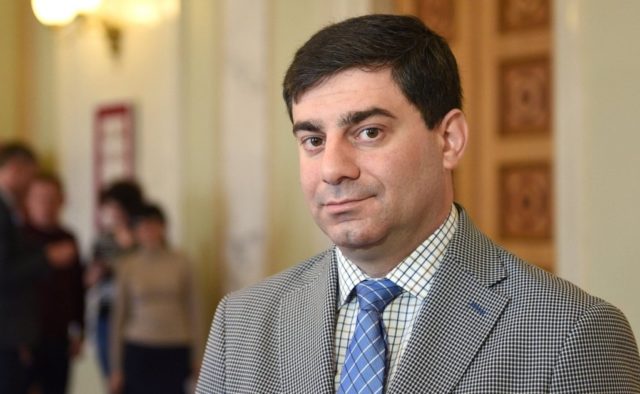 Dmitry Lubinets. Artem Volodin from the Office of the Ombudsman is connected with Kuzmin

The new team of the Office of the Ukrainian Parliament Commissioner for Human Rights is restarting the work of the National Preventive Mechanism (NPM). This is a national body that was created and operates in accordance with the Optional Protocol to the UN Convention against Torture and ensures the prevention of torture, cruel and degrading treatment in places of detention, writes Zmina.

Monitors of the NPM have the right to freely enter places of detention at any time of the day and on a day of the week, which are subordinate to various ministries: from guardhouses of the Ministry of Defense to detention centers of the SBU.

On September 2, during a meeting of Ombudsman Dmitry Lubinets with public organizations, institutionally strengthening NPMs, the parties discussed overcoming challenges in the further work of the mechanism.

The Ombudsman introduced Artem Volodin to the public, who should lead the direction of work on places of detention. Due to the state of war, there was no competition for this position, so the department was headed by a person who had not previously been involved in NPM issues and had no human rights experience.

Artem Volodin is a candidate of legal sciences, who worked in self-government bodies and the prosecutor's office.

On June 23, 2010, ex-Prime Minister Mykola Azarov appointed him to the post of Deputy Minister of Environmental Protection, which Volodin held until April 10, 2011.

From open sources it is known about Artem Volodin's connections with the deputy of the Opposition Platform for Life Renat Kuzmin. Thus, Volodin worked as an assistant to Kuzmin when the latter served as deputy secretary of the National Security and Defense Council and first deputy prosecutor general of Ukraine in 2013-2014.

According to the CEC, in 2014 Volodin was also a confidant of Kuzmin, who ran for the presidency of Ukraine in a single nationwide constituency.

Artem Volodin is the father of a people’s deputy from the Servant of the People faction Daria Volodina, who, as the Parliament.UA project notes, has previously been involved in scandals related to language legislative initiatives and the law on the liquidation of a scheme in the field of registering information in real estate appraisal reports . 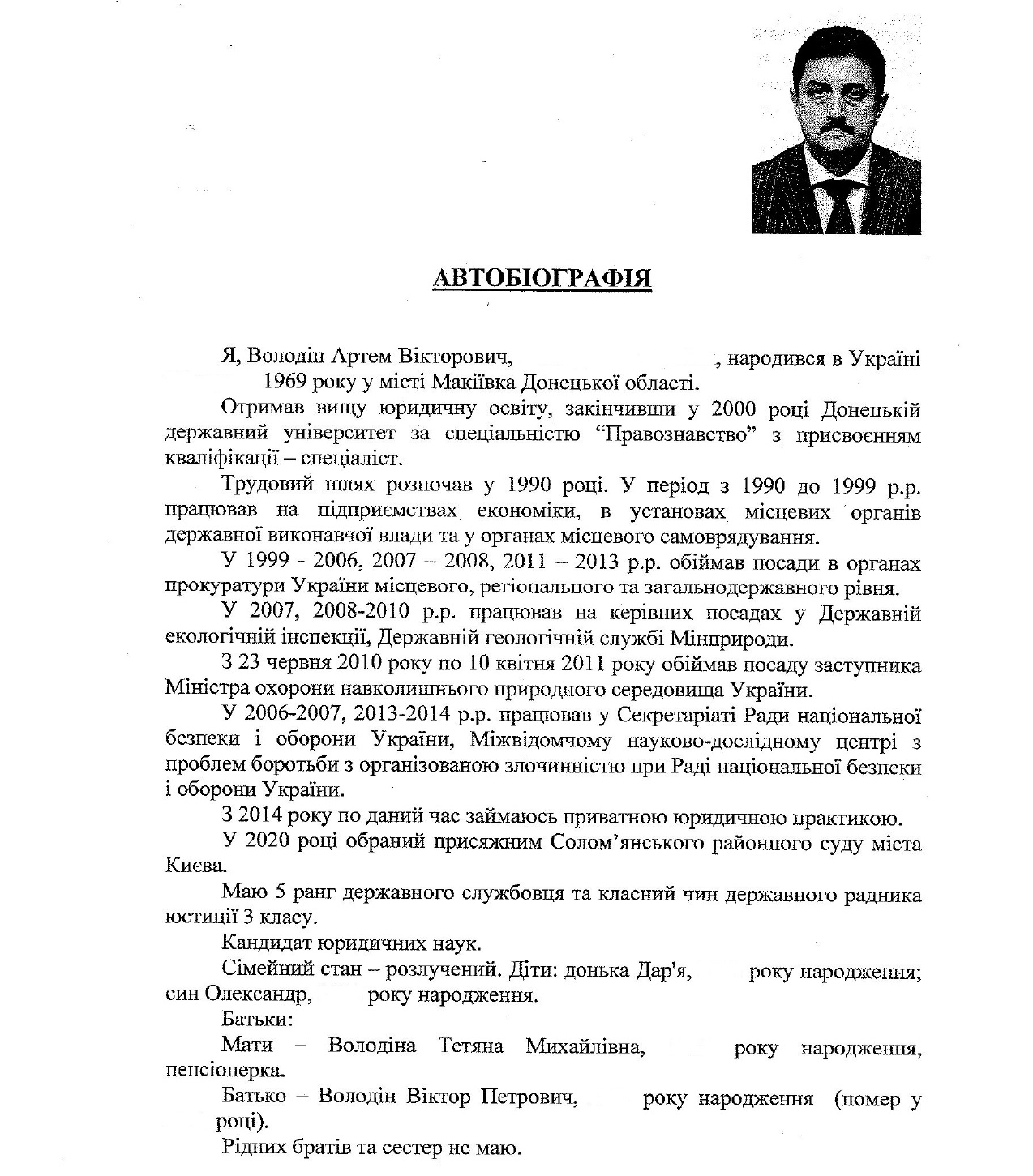 After the Revolution of Dignity, Volodin began to engage in private legal practice, applied for a member of the Accounts Chamber and a member of the Council of Public Control under the State Bureau of Investigation.

How the work of the mechanism will develop under the new leadership is still unknown. However, the transfer of prosecutorial experience to the NPM may threaten the very philosophy and principles of the NPM.

In addition, it is clear that one cannot expect a quick resumption of monitoring activities throughout the country, since the next weeks the leadership will have to get acquainted from scratch with the functions, nature NPM and establish its systemic effective work.

The office of the Ombudsman is open to the public, and in the coming weeks there will probably be meetings with public organizations to get acquainted with the improvements and experience of the NPM in past years. Dmitry Lubinets announced his intention to restore the database of the NPM and the map of places of detention, where the identified violations and recommendations for their elimination will be placed.

The new commissioner inherited the NPM from the previous Ombudsman, Lyudmila Denisova, in a far from good condition. The accusation of the former monitor Artem Osipyan of biasing the mechanism in favor of the Ministry of Internal Affairs revealed systemic problems.

One of them was that due to the created representative of the Commissioner for Human Rights in Places of Confinement Natalia Borodich, the NPM Department left the toxic atmosphere a number of highly skilled and empathic workers. Some of these specialists, having worked for many years, never received a new order from Denisova to monitor the NPM.

In addition, Dmitry Lubinets is surprised that, having made more than 900 monitoring visits last year, the Ombudsman's Office initiated only two response acts.

It turned out that the previous leadership of the Ombudsman's Office did not defend the prosecution in court of the administrations of places of detention, which did not let NPM monitors into the institution. As you know, it is the direct responsibility of the leadership of the department and the Ombudsman to protect the mandate of the NPM, since this affects the independence of the mechanism and the completeness of the data collected.

It is likely that the Ombudsman's Office will rethink the performance indicators of the NPM. But do not forget that the NPM is a soft power. It is impossible to create prerequisites for the administrations of places of detention to be afraid of monitors. This is not the purpose of the mechanism.

On the contrary, the monitoring group, which includes a qualified employee of the department, during their visits partly explains to the administrations of institutions why it is necessary to eliminate this or that identified violation, introduces the regulatory framework and changes in legislation. Taking into account their extensive experience and best practices, the monitoring groups advise the administrations of places of detention on how best to prevent violations of human rights or inhuman treatment.

But if the monitoring group reveals a flagrant violation of human rights, such as the lack of medical care or beatings, then The Ombudsman's office initiates a response act with a link to the norm of the law.

It is also important to separate the monitoring activities of the NPM and responding to citizens' complaints, because these are two separate areas.

The Commissioner must also send submissions to the heads of state and heads of ministries with recommendations on changes in legislation that should eliminate certain systemic disorder. In general, there were 20–25 such documents a year during the cadence of Lyudmila Denisova.

The previous leadership of the NPM was glad that the number of visits increased from year to year. However, quantitative indicators may not necessarily be qualitative. During a meeting with the Ombudsman, a former employee of the NPM Department, Elena Prashko, said that due to the overburdened employees of the department with monitoring visits, they could not normally work out and generate high-quality reports. Elena Prashko also identified copied parts from the reports of other visits.

Moreover, a participant in the monitoring visit from the public told me that during Lyudmila Denisova’s cadence, during short-term so-called covid visits, she was asked not to further investigate the discovered violation in the infamous Kagarlyk police station with the wording that this narrow-profile visit aimed only at the place of captivity ensured anti-malware measures. There was no such scandalous appointment by the Verkhovna Rada of Lyudmila Denisova and dubious personnel decisions.

Obviously, along with the number of visits made, a significant indicator of the effectiveness of the mechanism can be the number of systemic changes achieved, due to which torture, inhuman treatment or other human rights violations will stop. To do this, together with the public, it is necessary to develop a map of systemic issues in different types of places of detention, the solution of which must be advocated through joint efforts. This is a separate area of ​​work of the Ombudsman's Office, where the public can toughen the result with their expertise and advocacy.

The NPM should be the subject and actor of reforms. Its uniqueness lies in the fact that monitors can easily collect an evidence base and form an objective picture of systemic problems for each type of places of detention.

Artem Volodin. The success of the NPM

According to my observations, since 2016, the success of the Ukrainian model of the NPM has been in the steady development of the team spirit of the NPM community.

This is especially noticeable during the annual forums, in which all monitors of the preventive mechanism from different parts of Ukraine took part. During these forums, we reflected on the experience gained, learned from each other, developed common visions and solutions. The monitors saw that they were involved in the mechanism, contributing to the institutional capacity, and this inspired them.

—Why don't they go on visits? wondered former Commissioner Lyudmila Denisova during this year's NPM forum.

The answer was obvious, because it is necessary to invest efforts in the development of a community of monitors working on a volunteer basis, work on their motivation, constructively defend them in crisis situations, sincerely remove barriers, if any, and, of course, call for visits. During a meeting with the new Ombudsman, it turned out that during Lyudmila Denisova’s cadence, some new monitors were not invited to visit for months after completing the relevant training.

Cluster meetings of the NPM were also extremely effective, when a mass group of monitors came to a certain region, simultaneously visiting various types of places of detention throughout the region. As soon as the monitors started to work somewhere, the rumor about the group's arrival spread throughout all the places of captivity in the region, and they all prepared for a possible visit. These cluster meetings also had a great preventive effect.

Also, the effectiveness of the mechanism can be increased by appropriate changes in legislation in order to increase the weight of the Commissioner as an official, so that the recommendations of the NPM are more difficult for the administrations of places of detention to ignore.

Dmitry Lubinets clearly declared his intention to build the institutional capacity and permanence of the NPM. He wants the mechanism to remain efficient and effective and not depend on the personality of the Ombudsman in the future. However, the same requirements should apply to the Ombudsman himself. The fiasco of Lyudmila Denisova is a clear example of why a candidate for the position of Ombudsman should be elected precisely through an open and independent competition in compliance with internationally recognized standards of transparency, impartiality and the involvement of civil society.

DOSSIER: Lyudmila Denisova: an ombudsman with a criminal tinge, or the story of a cannibal. PART 1

From residents to prisoners of war. What MPs will vote for in Parliament

Narrow coalition. How “For the Future” and “Dovira” help the ruling party