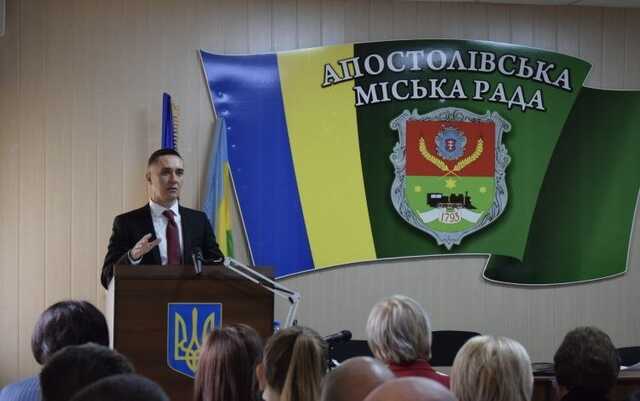 They want to behead the front-line town of Apostolovo: the land mafia against the mayor

The Russians failed to come to Apostolovo (a city in the Dnipropetrovsk region – ed. note), but the “decisors” returned, writes Antikor.

They are trying to discredit the mayor of the city, Andrei Osu, through a fabricated and “suddenly surfaced” case a year ago. A real pressure was unfolded against the mayor of the front-line city by law enforcement agencies and businessmen interested in the return of “agreements”. A possible reason is the war declared by Andrey Osa against the land mafia and its “roof” in law enforcement agencies.

Today, the mayor of Apostolovo, members of his family, as well as employees of the mayor’s office and part of the deputy corps are actually held hostage by the land mafia, which orders criminal prosecution and real terror of unwanted people. The front-line city itself is artificially introduced into managerial chaos and left to its own devices.

Who benefits from beheading Apostolovo?

In 2020, Andrei Osa won the mayoral election in the city of Apostolovo with a crushing score. He won 37.1% of the votes. The current mayor, Stanislav Nigai, won a little over 5% of voters' support. One of Andrey Osa's first steps was to revise communal property in order to return communal property to the community.

Soon, the mayor achieved the return of the self-captured land, and ensured an open auction for its lease. As a result, thanks to the actions of Osa, more than 1000 hectares of urban land began to be used legally, and money for rent began to fill the budget of Apostolovo. Almost simultaneously with these events, Osa began to receive threats from the land mafia in order to disrupt the auctions and no longer pay to the budget.

But Osa did not heed the threats of criminal circles and soon, in October 2021, criminal proceedings No. 42021040000000569 appeared, where the mayor of Apostolovo himself and members of his team became one of the suspects. But the fact for accusations of any acts of corruption, embezzlement of property, etc. was so insignificant that the case was investigated neither shaky nor badly. Andrei Osa calmly continued his work and the war with the land mafia.

And after there was a war… When both formidable investigators and valiant prosecutors somehow quieted down and hid behind ordinary village heads, mayors and heads of districts, and what’s there – and behind the backs of ordinary citizens.

From the first days of the war, together with the townspeople, Apostolovo was actively involved in protecting the city from the Russians, organizing humanitarian aid, and also provided evacuation for those wishing to leave the war zone. Osa's briefings were broadcast by regional and central media. Like most mayors and leaders of communities in Dnepropetrovsk Osa, Osa demonstrated an exceptionally pro-Ukrainian active position. Despite the complexity of the situation, Osa was close to the people, stood shoulder to shoulder with them in a difficult situation, and did not become a “remote mayor”.

They want to behead the front-line town of Apostolovo: the land mafia against the mayor 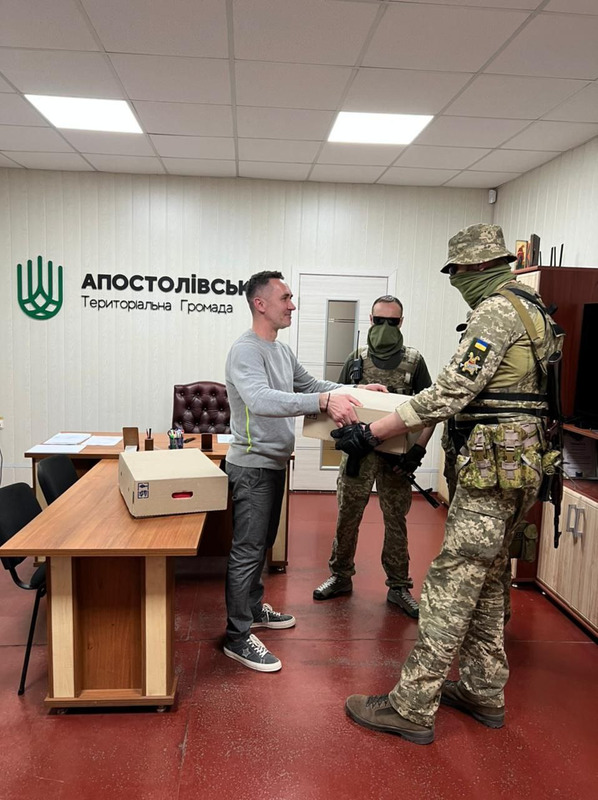 They want to behead the front-line city of Apostolovo: the land mafia against the mayor

Helping the inhabitants of the community, protecting the city and supporting the army by Mayor Osa and his team have been carried out continuously since the very beginning of the war .

Andrey Osa, together with public utilities, spent all the days of the war next to the residents. They often appeared at the scene of shelling simultaneously with the Ministry of Emergency Situations, and much earlier than many law enforcement officers, who were not very noticeable during the hot phases of shelling in the front-line city.

For example, on the night of June 15, they almost immediately began to eliminate the consequences missile strikes.

Continuously being in the front-line city for almost 7 months, organizing the defense and life support of the city together with the team, debugging work and building a logistics chain for the delivery of humanitarian aid for residents, launching hotlines of the mayor’s office and headquarters, providing assistance to both the military, and civilians, and migrants, Andrey Wasp … again came under pressure from land dealers and law enforcement officers who had already returned to the country, who, as if on command, remembered the case of a year ago.

Andrei Osa was detained right in his house on September 29. Investigators and prosecutors raised a hopeless criminal case from oblivion and gave it color and life, decorating the lingering accusations of embezzlement of public funds with a popular and win-win accusation these days… of course, in the creation of a criminal organization (Article 255 of the Criminal Code of Ukraine), because this article, according to law enforcement officers and their customers, is practically a black mark.

Surprising is the fact that since October 2021 the whole case has been lying dead weight in the dusty closet of the investigation. For a whole year, neither the investigator of the National Police in the Dnipropetrovsk region Oleksandr Moroka, nor the prosecutor of the Dnipropetrovsk regional prosecutor's office Denis Dykiy was worried about the terrible crimes of the mayor – the frontline zone needed his work to ensure the protection of Apostolovo. After all, it was the mayors, who enjoyed the support of the population, who became the real ministers of defense of their cities in the first days and months of the war. A logical question is why, if a dangerous corrupt official turned out to be at the head of the front-line city, then he was not removed back in March? Were you waiting for the outcome of the invaders' campaign against the Dnipropetrovsk region?

It turns out that the person to whom they are trying to impute the organization of an entire criminal group spent all this time defending the approaches to the city? Possessing actually classified information about the defense of the settlement? Communicating daily with the military, transferring help to the army?

Now Andrey Osa is in the hospital – he has been hospitalized in the Kryvyi Rih Infectious Diseases Hospital No. 1. At the same time, both prosecutor Dikiy and investigator Moroka do not stop there – they, by hook or by crook, demand that the mayor appear in court. Amazing zeal in relation to a man who was in his city under fire from Grads and Hurricanes, ensured round-the-clock work of the City Defense Headquarters and did not think to leave anywhere. Now, according to the logic of law enforcement officers, he must escape from a dropper, fearing a criminal investigation in an old hopeless case.

Previously, Andrei Osa was repeatedly summoned for interrogations, in a difficult state of health, moreover, they demanded and continue to demand to place him into custody, even house arrest did not suit the suspected prosecutor Diky.

In parallel with the attacks on Andrey Osa, the persecution of Andrey Osa's wife, the mother of his minor child, was also organized. According to editorial sources among the business circles of the city of Krivoy Rog, there is tremendous pressure on the judges of the Dnipropetrovsk region to actually shut down the disgraced mayor, his wife, and members of his team out of lawlessness.

Now the entire team of the mayor, part of the executive apparatus of the City Council and most of the deputies have come under pressure. That is, in fact, the city of Apostolovo is being artificially introduced into a state of managerial chaos.

Andriy Osa has already applied to NABU and the State Bureau of Investigation with a statement about the lawlessness of the investigator Moroka and the prosecutor of the Dnepropetrovsk Regional Prosecutor's Office Dikyi. 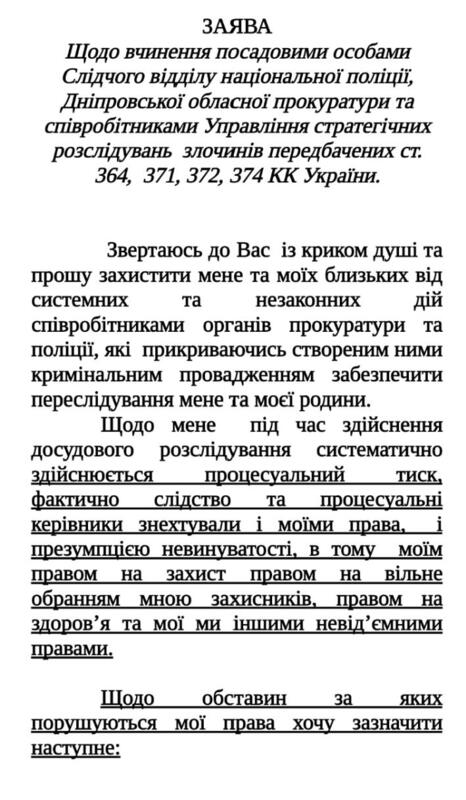 It is noteworthy who organizes the persecution of Andrei Osa. Denis Dykyy is a notorious prosecutor of the Saksagansky district of the Dnepropetrovsk regional prosecutor's office. It was against him that the inhabitants of Kryvyi Rih at one time went out to protest, because he covered Ukrainian soldiers with obscene language in the courtroom! He is also accused of “covering” illegal scrap metal collection points in the Dnipropetrovsk region.

Based on the reputation of Mr. Diky, it is not surprising that the investigative actions were carried out without the participation of the main suspect at all – he simply did not know about them. As well as about “expertise”, “his accomplices” and other details of a high-profile trial. Now Andrei Osa, his family and children, close relatives are under total pressure, up to denigration in anonymous telegrams – channels, surveillance, intimidation, total pressure from the Wild and Moroka investigator.

So, the main question is why was the mayor of a front-line city locked up in a pre-trial detention center at the height of the Russian invasion? After all, the case was resurrected exactly one year after its quiet inception – as if on order & # 8230; An order from someone who is not at all comfortable that Andrey Osa did not become a member of the “Monaco battalion” or a marauder, but continued to fight not only with Rashists, but and with internal nits in the form of a land mafia.

An official of the Kharkov City Council at the height of the war lit up on vacation in Nice and Monaco: she celebrated her birthday. Photo

Abramovich and Vyazmikin, who fled to Monaco, continue to cash in on Ukrainian producers of alcohol and tobacco